It's Time for School!

Tim Carter is an English teacher who knows how to deal with anyone who makes fun of Finn Palmer and his "TIME TO GO IN EVERYONE" line.

Tim Carter makes his way through a school door.

Tim Carter always walks into a classroom in time for a lesson.

Keep tapping the B button and Tim will slowly bury the opponent by smashing his briefcase.

As he keeps smashing the case, the opponent will go further and further towards the underground.

If the opponent has enough damage, Tim can meteor smash them below the surface they're on.

Missing the opponent causes Tim to smash the briefcase open, revealing Personal Food. However, it will only break open if he has smashed it enough times.

Tim is always seen carrying his suitcases in lessons. It probably contains things like pencils, books and other stationary.

Side B: Corner Run

Tim Carter stomps his way forwards. If he touches someone, he will continue damaging them until he stops stomping. It can be used as a cheap KO if done by the edge of the screen.

If he corners them towards a wall, they will be forced to sit on a chair for one minute. His stomping causes knockback if in contact with seated opponents. It also destroys traps.

When Jack Mayhew annoyed Finn, he told on Tim Carter who told him to go to Mr. Paul's classroom. He wanted to turn back as soon as he was near the door while Tim wasn't looking but he cornered him right into the classroom.

Up B: Walky Talky

Tim Carter phones Jackie to elevate him. Then, Jackie appears in a random spot and approaches Tim, giving him a lift once she's next to him. Careful though because sometimes, he will be distracted by a conversation with her.

Tim Carter's classroom is the waiting station at the end of the school day. Tim communicates with Jackie here with the Walky Talky who is always next to the buses. However, there is not elevating platform.

Down B: Sit Down!

After announing "Sit Down!", a chair descends from the sky or ceiling. If it lands onto an opponent, they will sit down like in his Corner Run.

He also has a special grab move that can only be activated to a seated opponent. His regular forward throw allows him to move around with the chair and opponent before throwing, like Donkey Kong's forward throw.

Tim Carter announces this quote at the start of many of his lessons.

Tim Carter yells Matthew Whitehead's first name so loud, everyone will be startled and stunned until they get hit. If the smash is being used on Matthew players (his Elouise alt doesn't count), he will most likely be KO'd.

In one English lesson, when Matthew was messing up too much, Tim had to yell out his name to shut him up which startled everyone in the classroom.

Down Taunt: "Do you know what a dado is?"

Option #1: "You've got a maths test, an english test and a science test and I all want it done in one minute. Sit down!"

Option #3: Looks above with the meme caption "Time to go in everyone".

Down Aerial: Drops a heap load of exam revision books. The books fall until they hit something, making an easy spike.

Up Tilt: Points an interactive board pen. Faster than most of his other attacks.

Side Tilt: Raises his arm forward yelling "Time to go in everyone". Pretty slow but satisfying to land correctly.

Dash Attack: Clumsily falls over damaging himself when landing. Leaves him open but does good damage and knockback if anyone gets hit, even at low percentages.

Down Tilt: Slams his suitcase in front of him.

Side Smash: Smashes with his briefcase and then drops it. If the suitcase is dropped by a ledge it can work as a falling projectile.

Down Smash: Drops 2 briefcases. Unlike most of his other attacks where he drops something, the breifcases disappear and offer no projectile capability.

Grab: A school bodyguard walks in and restrains them.

Forward Throw: Tosses them yelling "This is your cell go there now!"

Detention Grab: Grabs the opponent's chair. You can move back and forth while carrying them.

Detention Throw: Tosses them forward. The opponent has no control and cannot stop themselves until they land.

School Rumble Soundtrack - Rome Was Not Built In A Day

Owen Maddox: Boss, Do You Know This Teacher?

Angry Boss: You're Joking Right? Of course I don't.

Owen: Don't you remember? He Was Your Partner When You Yelled At Him to Kick Hilary's Butt. Then you turned on him to go look for Bruceton?

Owen: Yep. Anyway, He can attack by hitting You With A Briefcase. If You Miss, It Will Break and Lawl Food Will Appear, Like the Chill Pill, School Turkey, Mushroom, or Cheeseburger. And He Does a weird Corner Run, where he can actually make you sit in the Corner, And Also.....

Bruceton: You Were Expecting my buddy Tim Carter? But It Was Me, BRUCETON! All Along! *Laughs*

Angry Boss: BRUCETON! YOU ARE SO GOING TO GET FIRED RIGHT-

Jeremy Gilman: Relax, It's Me!

Angry Boss: Gilman! Thank God It's Only You! Tell Me More About Tim Carter.

Jeremy: Well, He Calls Jacky to Give Him A Lift, and he can also force opponents to Sit Down, he does this by Summoning A Chair Above You And It Has Focus, Unlike Talking Joe's Birthday Cake.

Angry Boss: And What About His Final Smash?

Amanda The Panda: Where's My Snooky?

Angry Boss: I Don't Have Your Snooky!

Finn Palmer: I'm Now Going to Tell The Whole World on You!

Angry Boss: Finally Victor. Tell Me What You Know About Tim Carter.

Matthew: Don't you dare laugh at me!

Angry Boss: Oh get a sense of humour, Matthew Weewoohead.

Chadtronic: You have been fooled!

Angry Boss: WHAT IS THIS!?

Angry Boss: REVEAL YOUR TRUE SELF!!!

Billy: Chill man, it's just me!

Angry Boss: Billy? Have you been dressing up as everyone this whole time!?

Billy: Hey, if Fred Savage can do it, so can I. Anyway, who are you talking about?

Angry Boss: You Know What? Forget It! This Codec is Taking Too Long, Time to End It Right Now. 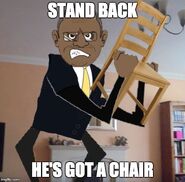 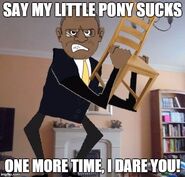 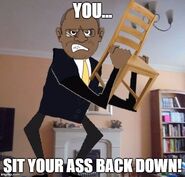 Stand back Simpson, he's got a chair!
Add a photo to this gallery

Retrieved from "https://all-star-smashers.fandom.com/wiki/Tim_Carter?oldid=16699"
Community content is available under CC-BY-SA unless otherwise noted.