View source
watch 01:36
We're Getting Mutants in the MCU - The Loop
Do you like this video?
Play Sound

Hamilton Ogata
Yuuki Ogata, also known as Kaik Yuuki, is a Portuguese YouTuber, musician, artist, former GoAnimator, and a non-sensical blocked horse from this wiki who speaks absolutely gibberish, and almost everything he says makes no sense whatsoever.

Some of Yuuki Ogata's gibberish comments look like he's mentally freaking out which is a worry if he really is.

Yuuki randomly says random gibberish comments that don't do that much damage.

In the comments sections of different videos, notably the Smash Bros Lawl movesets, Yuuki and Hamilton Ogata's weird comments can be spotted. It is unknown what they are about and what they mean, but they annoy a lot of people. It was later revealed that they could possibly be Lawl quotes, memes, and references written in a weird grammar, while another reveal states he just made them to troll.

Side B: Bad Stats

A random turd drops down on Yuuki, making his stats shittier. This also makes his special moves look powerful.

In this page, Yuuki Ogata mentions the words "bad stats" at the end of his comment.

"The reason if Brodi attacks me after a moveset from me. And yes, Megan will call MarioLeopoldSamRoblox for beating up Lee or even me before fighting a moveset from me. And yes, my B moves will be Keygen, and my normal attacks will be Brodi before I beating up her, causing a huge damage. This also explain Brodi getting beated up me after this bad stats from her."- Yuuki Ogata

"Zoo Tycoon 64, please note that I edited from her bad stats."'- Yuuki Ogata

It is assumed that he got those two words from Sonny Slaven's trophy description.

A miniature tsunami drags Yuuki upward, which does tiny pushback.

Yuuki posted a reply to Amanda the Panda's comment on her own moveset, saying "you does a...........Tsunami!!!!!!!!!!! (jumps over you)﻿". It is assumed he got the tsunami bit from Amanda's YouTube channel description.

Down B: Crocodile is Dead from the Funeral

This is based on a comment he wrote in the comments section of YTPguy17's channel. It turns out however that the comment was actually based on Yuuki's clay sculpture of a crocodile, that broke a while ago. After the sculpture broke, he spammed non-sense about his "dead crocodile", one of these spams ended up gaining massive attention on YTPguy7's channel.

Final Smash: Who's this character?

A picture of Sonny Slaven's Channel Art appears behind Yuuki, who asks "Who is this character behind me?" An opponent tells him that it's a city, which angers Yuuki, who says "Respect my opinion or I'll block you!" Then, Yuuki blocks that opponent. If he does not him or her in time, then the blocked button will KO Yuuki.

In this weird video, Yuuki tells the viewer to guess the "character" who appears in the video (I guess). It is also inspired by Nostalgia Skapokon's comment and Yuuki's hidden reply.

Up Taunt: Pulls his real face.

Side Taunt: Says "This is my moveset."

Down Taunt: Yuuki gets KO'd.

Option #3: A picture of a city can be seen instead of Yuuki or the loser.

Losage: Yuuki lays down on the ground.

Up Tilt: His head turns into a city.

Neutral Attack: He makes a so called reaction video showing wildlife such as birds while Mr. Scruff's Kalimba plays and he yells "WHAT WAS THAT?!"

Side Tilt: Slaps with a random YT comment saying "You take this!"

Down Tilt: Falls over, hurting himself

Angry Boss: Okay. I will 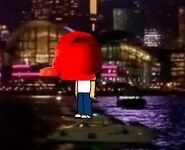 Yuuki Ogata's Up Taunt in action.

Community content is available under CC-BY-SA unless otherwise noted.
Advertisement